I love August. I love that I was born in this month, I love where it falls in the calendar, I even just love looking at the word August. Drew and I even toyed with August as a possible baby name when we were in the business of coming up with baby names. Unlike the other summer months, August is always whispering that September is near, and reminding us to take advantage of the lingering light, the warm mornings and any nearby bodies of water. In that way, it feels like a month of celebration, and the word that comes to mind is something along the lines of abandon, but that could just be me.

Drew has celebrated the coming end of summer by competing in a triathlon (his first) and doing quite well.  This past weekend we went to a nearby nature area where Drew completed a 3/4 mile swim, a 11.5 mile mountain bike ride, and a 4 mile trail run.  Unfortunately, he took a pretty big spill about 5 miles into the bike ride, but he was able to brush himself off and finish 8th in his age group.  We cheered him on, and gave him lots of ibuprofen when we got home!

For my part, I’ve celebrated a birthday this month, and have been basking in all of the love that I’ve been feeling lately.  I am so thankful for our community of friends and family, and this year especially, it warmed me to the core to be able to mark another year passing with such wonderful people.  Thank you, to all of you, for the happiness that you bring into my life. 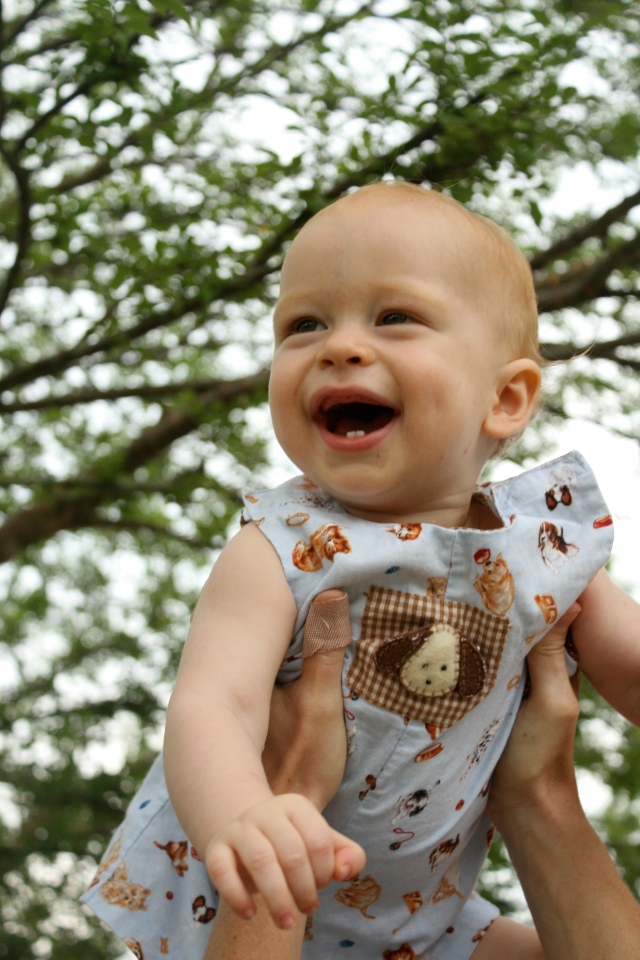 Asher is spending his time checking everything out.  My mantra of late as I’m locking cabinets, cleaning up explosive mess after explosive mess, tucking exploring hands and fingers away, and reminding this little boy that we are gentle when we touch everything in sight is, I celebrate this child’s curiosity.  And mostly, I really do.  There are moments when he’s attempting to crawl off the changing table in a position that you mostly see at a Russian circus, when I think, c’mon kid! but mostly we’re trying to roll with the curious punches and let him find out what this world is all about.  He’s crawling off his belly and up on all fours now some of the time, and pulling up at every chance that he gets.  He’s nominally interested in walking (no first birthday steps here!) but mostly prefers to get down on his belly to shoot at mach 12 across the floor towards his next challenge.  He’s seriously into dancing, shaking his little torso and head at everything from the All Things Considered theme to David Bowie.  Just whistling or humming will get him to dance, and of course we all fall to pieces whenever he does.  Drew and I make an effort to do a little dancing every week, even if it’s just in the kitchen, so it’s doing our hearts good to have the young sir join in.  Asher has also taken to patting Drew’s arm and emphatically saying, Baba!  Baba!  Then he’ll pat my arm and enthusiastically call…Baba!  Baba!  We look at this as being pretty ingenious….why bother with giving us different names, when the one is working so well? 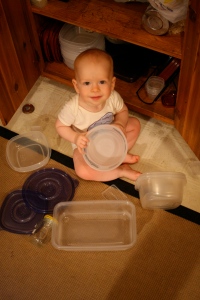 We’ve been hitting the pool because it is in the 100s in Virginia.  As in, 100 degrees outside!  So there’s nothing to do in this kind of heat except to seek out the nearest body of water and relax.  And splash a little.  Or a lot.

Drew and I talked a lot this weekend about how we both look forward to the 4th of July because it’s always been a free day in the middle of the summer when parents are supposed to be at work and children get to look forward all of the little icons of summer that add up to create our collective memory of those wonderfully hot and playful childhood days.  In addition to the history of Independence Day, when someone starts talking about the 4th of July, my mind starts swimming with visions of watermelon and the sounds of cicadas, potluck meals, colorful picnic blankets, tanned knees, and Queen Anne’s Lace.  I can sense the excitement of watching fireworks and waiting for the finale and can perfectly see the tipped up and illuminated faces of friends sitting in the dark and staring into a psychedelic sky.  The 4th is so symbolic of the height and heat of summer, of friends getting together and of the dreams of reckless abandon that this time of year awakens in our hearts.  The car windows roll down, the dog tongues flop out and the wind in our hair is just a whisper of the freedom that we each secretly long for in these long hot days.  It’s just so summer.

For our part, we celebrated with friends and family, though with The Young Sir in tow, our night ended not on a blanket staring at the sky, but on a back porch with fireflies doing their best to keep time and the crinkly pops and booms of fireworks in the distance.  We had our laughs and fill of potluck fare, and then we came home to a quiet house with a sleeping boy and watched the stars come out before we turned in.  It was a fine summer day.

Pictures to follow, we are at my parent’s house hanging out with my brother who’s visiting from NC, and the internet connection is not down with uploading photos.

If you’ve been wondering where we’ve been, we headed to the beach for a looooong and delightful vacation.  We started last Thursday and flew to Amelia Island (yep, you guessed it…my namesake) where my father and his family grew up.  We stayed with my aunt and uncle Mike and Leisha, and got to see pretty much all of my dad’s family.  I can’t believe that this is true, but it had been 10 years or more since I had seen a lot of this side of my family, so it was really special to bring both Drew and Asher home to a place that I spent many a summer as a child.  We gathered to celebrate my Grandfather’s 89th birthday and got all of the cousins together.  On Saturday we jumped into a car and drove the six hours from Amelia Island to Perdido Key, Florida to meet up with Drew’s mom Jo Ellen, his sister Ashley and her family, and Drew’s younger brother Neal.  We take this trip every year, and I have to say that we are really hitting our stride.  This year we managed to get in a minimum of 12 hours of sleep every day, we spent our time almost exclusively on the beach, by the pool or curled up in the condo, eating all of our meals in and heading to bed with the rising of the moon.  We slept better than we sleep at home (Asher had his own “room” in the walk-in closet in our room and that seemed to suit him just fine) and just generally loved having so much relaxing time as a family.  Jo Ellen had the inspired idea to bring baby pools for the kids, so we filled them every day and sat under the tent on the beach with Asher splashing around in his own private (and safer) ocean.  He was content to sit and splash for quite a long time, safe from sun and waves, but getting to take in his first week at the beach with a big sandy smile.  There are a lot of pictures and videos from the trip, but I’ve chosen a few of my favorites to share and am happy now to be back home with a headfull of happy memories from a wonderful week away.

Here are some pictures from the trip to Fernandina (Amelia Island).  A special note to the pitcture of me and Asher with my father and grandfather, his great grandfather.

And some pics from our time in Perdido Key: (The girls are our nieces, Charlotte, on the left and Caroline, on the right) 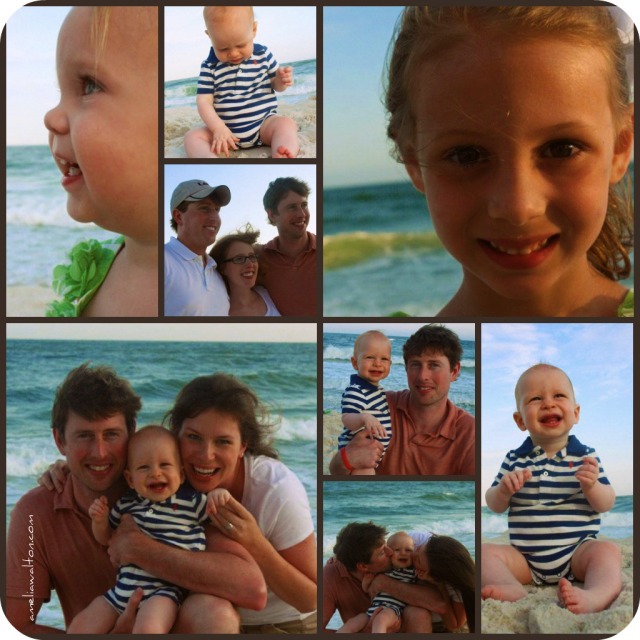 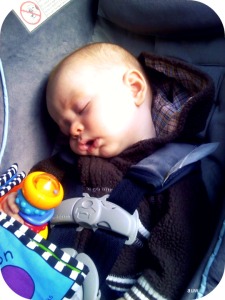 Yesterday I had lunch with some friends that have a gorgeous son that is 2 months younger than Asher.  Near the end of lunch, we were closing in on both boys nap times, and they expertly put their son in the baby carrier and after babbling for a few minutes he conked out.  I looked at Asher sitting in the high chair playing with a straw, the menu, the assortment of diaper bag toys and anything else within reach and knew that it was time to head home to the crib so that he could hit the hay.  Asher is a great sleeper, we just close the curtains, turn on the fan, and lay him down with a minute of back rubbing before leaving the room.  He will sometimes fuss for a minute, but then it’s lights out, no problem.  That is awesome.  Here’s the catch: it seems that he has to be in a crib.  In the dark.  With the fan.  On the one hand, I’m so stoked that we’ve got a good sleeper that goes right down for naps and bed time, but on the other…well I’m a little nervous that Summer is here and we won’t always have a bed on hand, and I’m feeling pretty jealous of our friends that know their kids will at least get something like a nap if they can’t make it home right away for that much needed sleep.  We have a few camping trips planned this summer (it’s ok if you think we’re nuts, I promise to report back) and an airplane trip this Thursday, and all I can say is that I hope Asher eventually gets sleepy enough that he’ll close his eyes for a minute or two.  What’s funny is that I can’t fault him for this at all, because I am so much the same way.  I sleep at sanctioned sleep times, and otherwise, I don’t want to miss any of the fun.  Like his mama, Asher wants to be awake when it’s time to be awake, and a little eye rubbing isn’t going to get in the way of that.  He wakes up this way too, as if sleep just suddenly turns off, and in 2 seconds flat he’s kicking his legs and smiling at the ceiling, happy to have returned from the land of dreams to the land of the living.  He wakes up ready to go.

The picture above is one of the very few times that he’s fallen asleep in the car (holding his little toy, too cute) and I’m hoping that in the coming weeks, we get a couple more pictures like this…a peaceful sleeping child that is willing to miss 45 minutes of this wild world to zoom around in the mysterious confines of his resting mind.