I am going to attempt to catch up on the last—ah–month or so with a series of 4 posts.  Part one, consider yourself written. 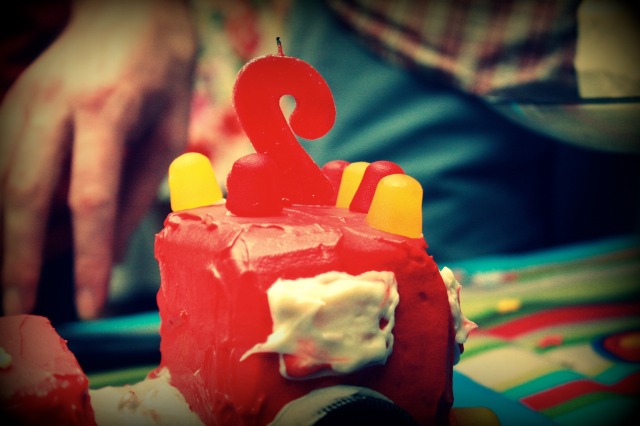 Our baby boy is 2.  In our house, the morning of September 11, 2011 could not just be about hushed memories of where we were 10 years ago, because in our lives, it simply can’t be.  Instead, we talked about where we were 2 years ago.  We walked through the story, looked at the spot in the living room where I rocked back and forth in labor knowing that a little child who was on the inside was about to come out, we told Asher about his quick arrival, and remembered the date that is affectionately known as the day of 10,000 kisses in my mind, the day that we became parents.

Asher remembers this as the day that he gets to eat cake.  In fact, he has not forgotten about cake, and asks daily if there might be more cake to be had.  For a week after his birthday every time the fridge door was cracked, Asher would snap his head in its direction and ask hopefully, “firetruck cake?” knowing that more chicken or pasta was most likely in his immediate future.  One turns two, one falls madly in love with banana cake, one faces the cruel truth that daily cake eating is not part of one’s immediate reality.

It may not win any awards, but I'm going to shamelessly say that I am disproportionately proud of this cake.

We had a sweet little party in our back yard for Asher.  My stepmother, little sister, mother, and Drew largely made this party happen.  While I was furrowing my brow over a bowl of frosting and a hunk of cake, they were weeding and spreading mulch (I’m not kidding), potting plants, wrangling and thoroughly entertaining the birthday boy, and generally making our house go from drab to fab.  I don’t know how anyone does anything without a crew, or at least how I would do anything…they were birthday superstars.

I loosely put together a firetruck party for Asher which meant that everything was in primary colors and we had a firetruck cake.  We pulled out all of our yard water toys and tossed in some bubbles, stripped the kiddos down and let them run around.  I also used this as an excuse to buy 34543 balloons because honestly, balloons make everything more festive.

So…two.  Our little boy is two and so full of two-ness.  He’s talking and talking and he likes to go fast on the bike and he wants to do everything himself, he has people that he talks about constantly and calls ‘special’, he wants us to tell him stories about trains and horses, he has a favorite color (yellow) and a favorite toy (Yellow The Red Bear–Drew came up with that one) and about a zillion favorite things to do around the house.  He likes pasta until the second that he doesn’t want it anymore, he can take his own shoes off (and almost put them back on) he still snuggles with his mama, he can count on one hand and sing a very adorable, very incomprehensible version of the ABCs.  Our late walker is now a bumbling, enthusiastic runner, he loves drawing and making art more than any other part of his day at school and he can finally say ‘helicopter’.

I like living with a toddler.  More specifically, we love living with Asher.  Drew and I, incorrigible saps that we are, look over our little carrot-topped child and come this close to choking up on a daily basis.  We’re so shocked by all of the human-ness that comes out of this little human, and we still struggle to wrap our minds around the notion that Asher is something that we created.  We created him, and yet he’s so much his own little vision.

We’ll never get over that, will we?

So Asher is two, he’s been in our lives since I first learned of his mysterious presence one night in February of 2009.  He’s so big and so little, learning so much with such a long road in front of him, toeing the line between baby and little boy.  It’s possible to say that although our story is a great one, we never knew how much love the two of us possessed until we knew him.