I went to Vermont weekend before last for my friends Hannah and Gray’s wedding.  As it turned out it was considerably cheaper to fly into Boston (about 3.5 hours from VT) and then drive over the river and through the woods to the wedding.  As it further turned out, it was also going to be cheaper for one of my best friends and college roommates, Charlotte, to fly from her home in Milwaukee to Boston and as fate would have it, we arrived about the same time and kicked off a fantastic little road trip through the Northeastern countryside. 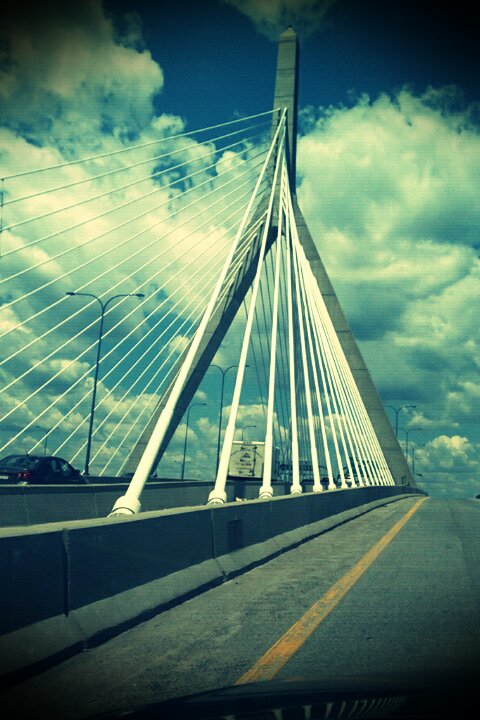 Driving out of Boston

We screamed out the windows and did some enthusiastic strapped-in-a-seatbelt-car-dancing and we hunted down a diner for some roadside fare, took a lot of pictures of barns, and just couldn’t stop saying, “gaaaahhhhhhhh, it’s all so scenic!” about every 15 minutes.  Our 3.5 hour drive took almost 5 hours and my cheeks hurt from laughing and smiling so much when we finally made it.  It’s just all so scenic up there, you know? 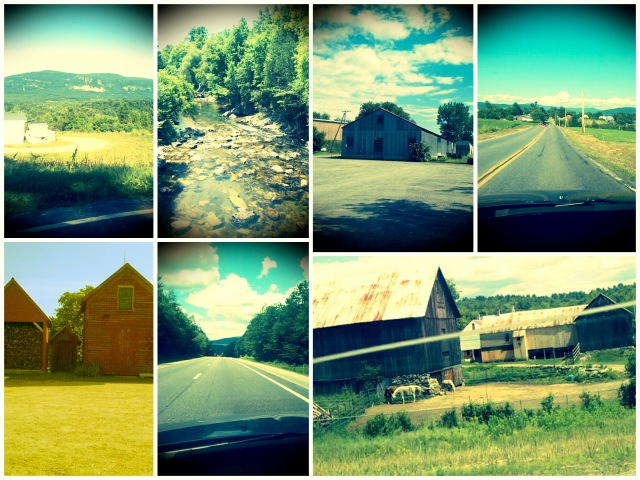 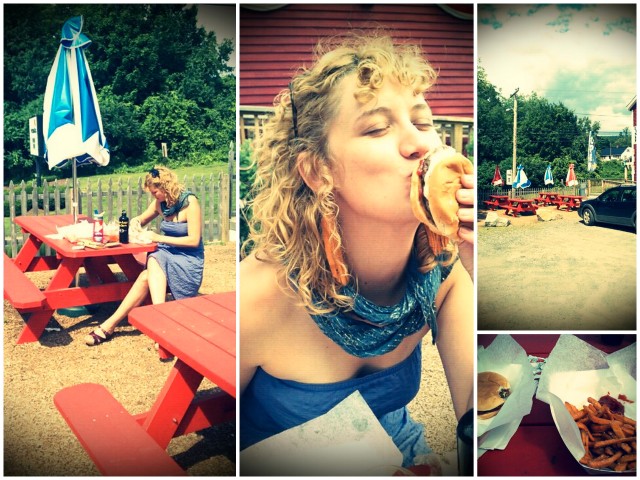 When we arrived we were greeted by these beauties: 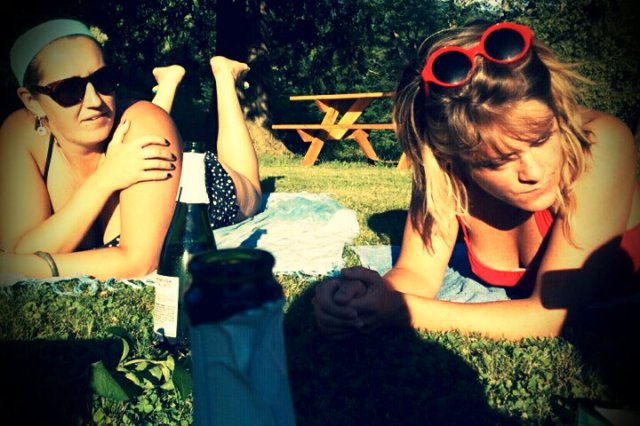 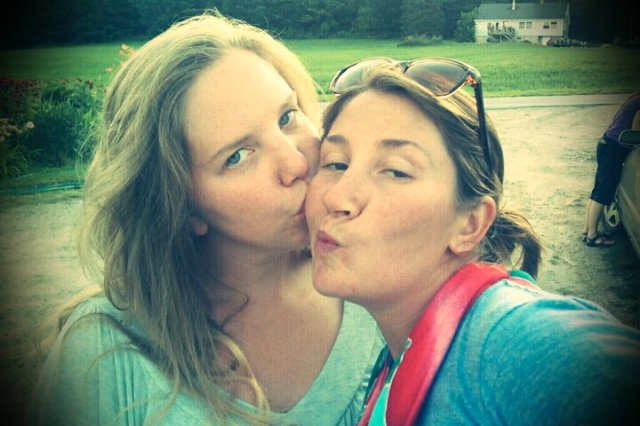 And we hugged so hard and my cheeks started hurting some more. 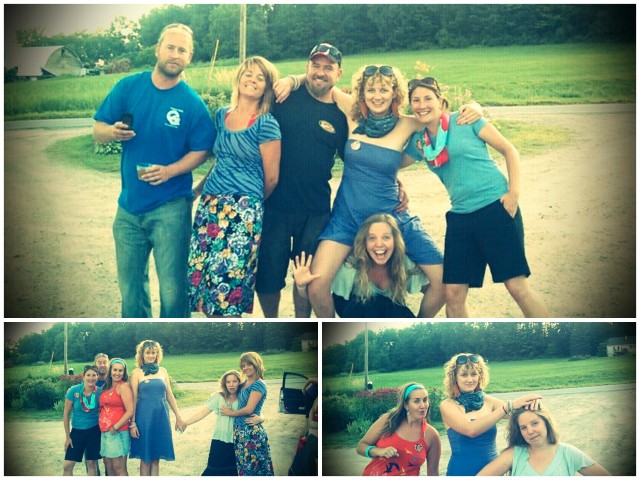 The wedding was being held at Hannah’s lovely family farm near Middlebury and if you ever have ANY reason to visit that part of the world, please do it.  The farm house that Hannah grew up in was built in the 1850s and as I understand it, apart from the addition of a screened-in porch, it’s pretty much in its original form.  Although I would say that the countryside is quite similar to my southern Appalachian upbringing, the mountains up there are a bit newer (relatively speaking) and a little steeper, and the homes are mostly in considerably more livable condition than the ones of the same age that dot the backroads I grew up driving around on.  The quaint charm factor is off the charts.  Everything just seems to be well tended and cared for as if there was a statement sent out to the good people of Vermont to maintain and guard the collective aesthetic dearly, and they all seem to take that charge seriously. 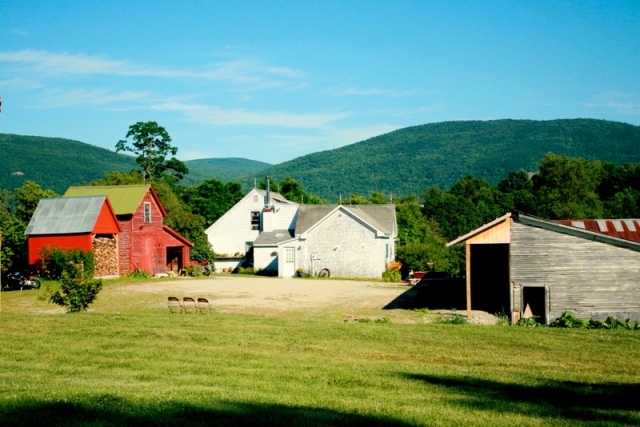 On Saturday we woke up to help arrange flowers for the wedding and lend a hand where we could and then we sought out the river for a quick dip. 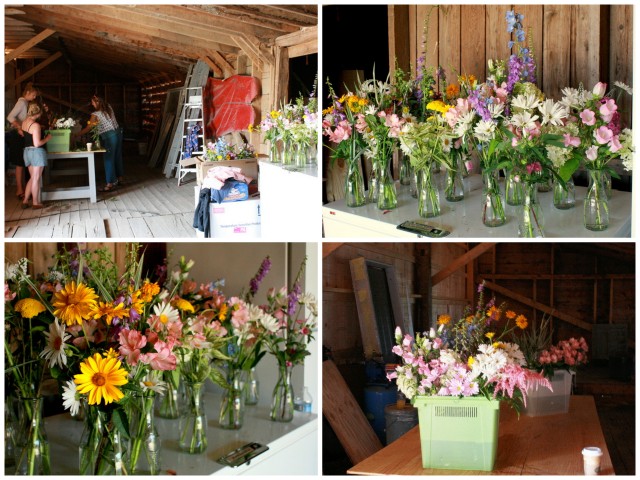 That water was c-o-l-d and refreshing and really really cold.  It was very cold water.  The water was the kind of cold that gives you a short-lived but highly effective involuntary cussing reaction.  But let’s just say that you find yourself experiencing a little discomfort because the night before you had a cocktail or two and you think that the discomfort that you’re feeling is actually kind of awful.  All I can say is, get thee to a freezing cold river under a bright blue sky and just watch as all turns right in the world.  We were back in action seconds after that dip. 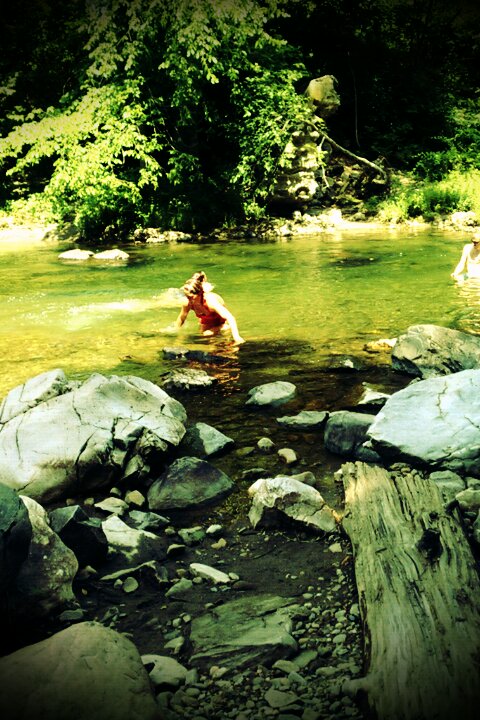 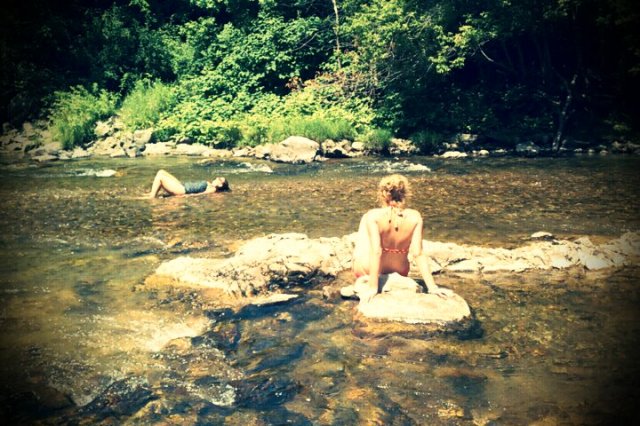 The wedding was in the back yard behind the house and between the beautiful Vermont mountains, the charming bagpipe player, the look of emotional gratitude on Hannah’s face as she rounded the corner to walk down the aisle, and the gigantic smiles of so many faces that I love,  it was one of the best ceremonies that I’ve ever been to.  Hannah’s sweet reaction to getting married had us all bawling in about 3 seconds, but then we were laughing just as quickly because she and Gray were just right there, sharing their commitment with us and it was comfortable and love-affirming. 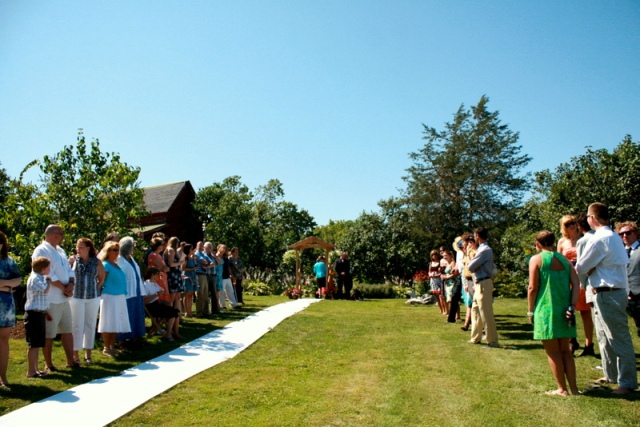 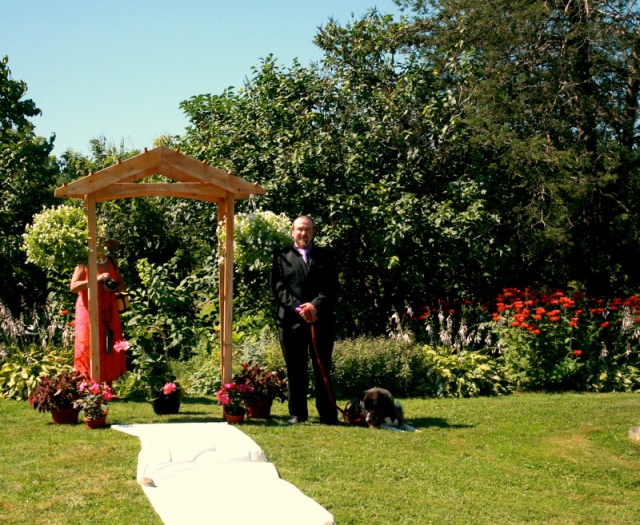 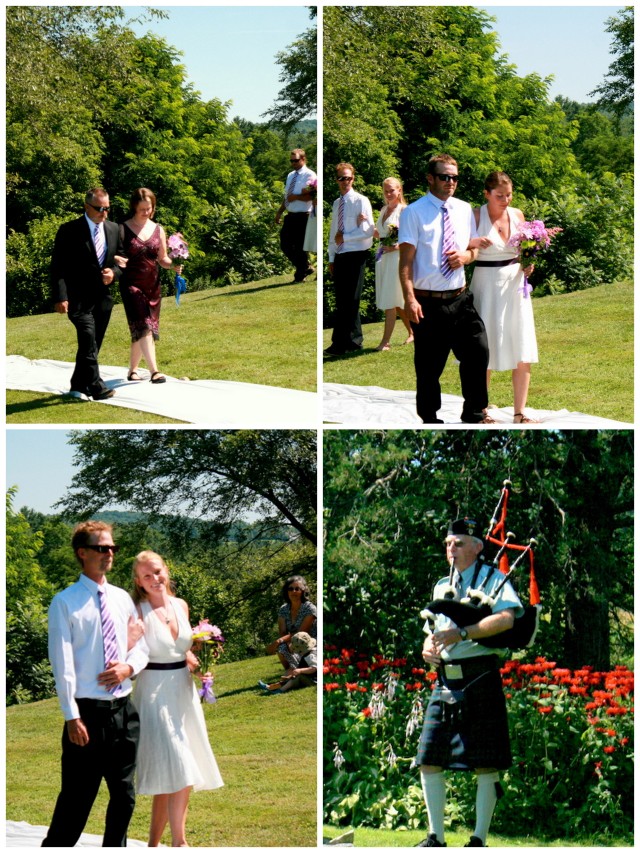 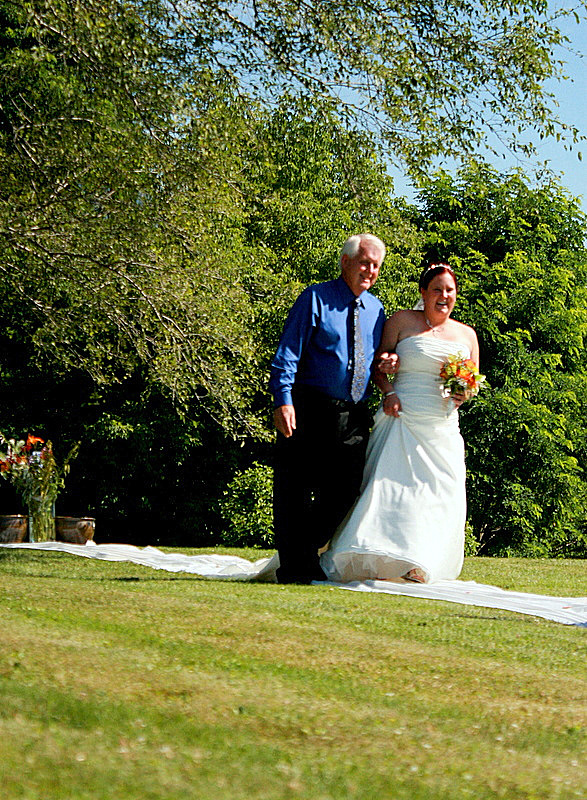 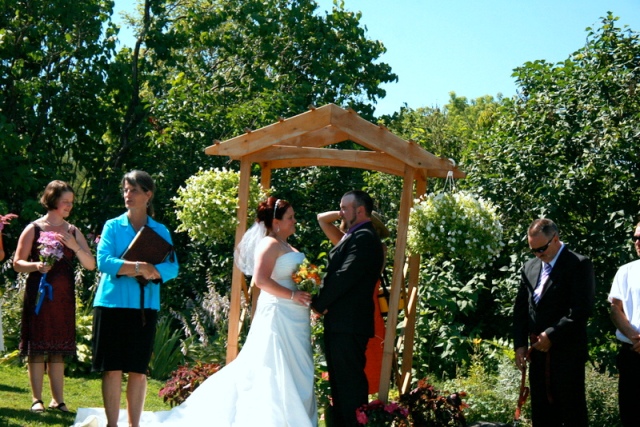 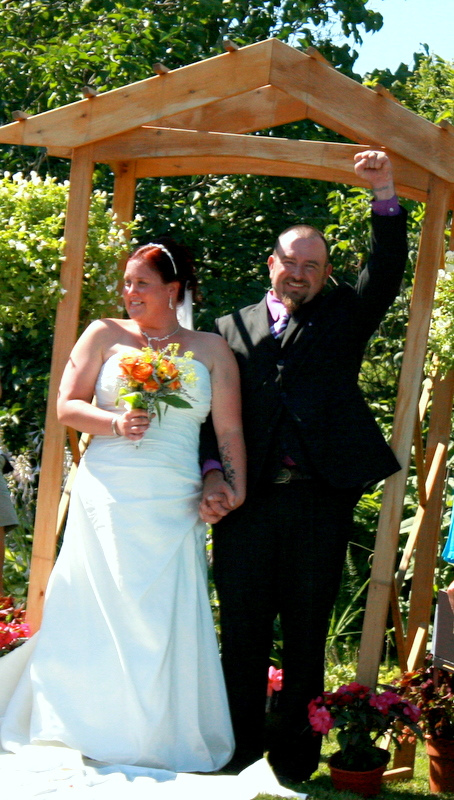 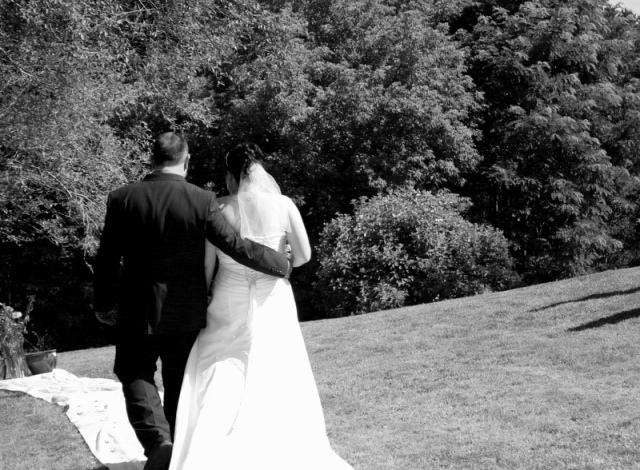 Following the ceremony we…ate, danced, and were merry for about 12 hours.  I could elaborate, but that pretty well sums it up.  We beat the sun coming up, but only just, and our heads hit the pillow with the words, I don’t want it to end, lingering in the air above us.

I love my friends from Warren Wilson College.  I don’t think there’s another group of people that is any better at finding the real kind of fun that’s out there to be had in this life.  Whenever we go to a WWC wedding there’s no pressure, no fuss, no drama, and definitely no stuffiness.  We laugh hard and dance hard and find ourselves slipping into serious conversation only to be doubled over laughing a few minutes later.  We don’t get to see each other nearly enough, but when we do, it’s always as though no time has passed (though the wave of children that we’re all starting to pop up with begs to differ) and without fail, I always walk away feeling so thankful to have all of these wild and crazy and sincere souls in my life. 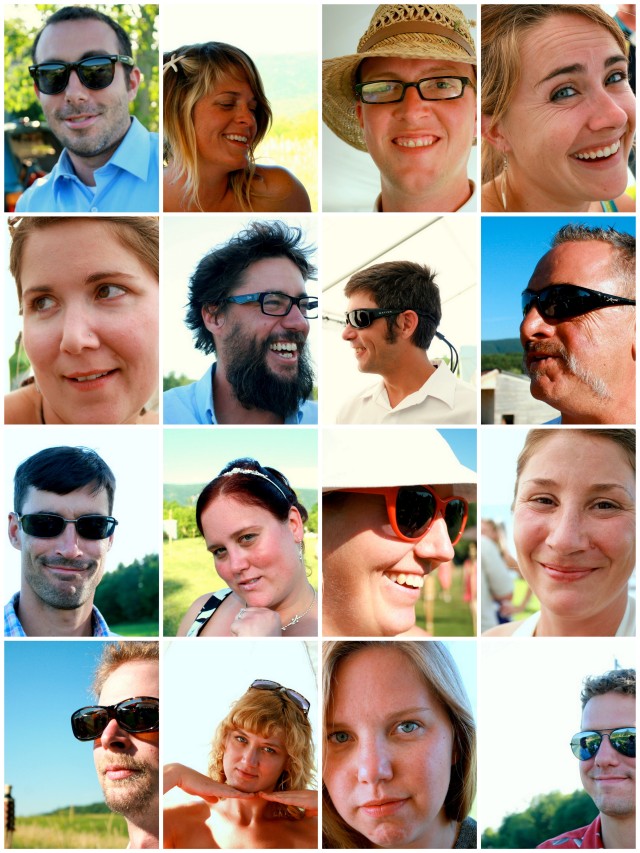 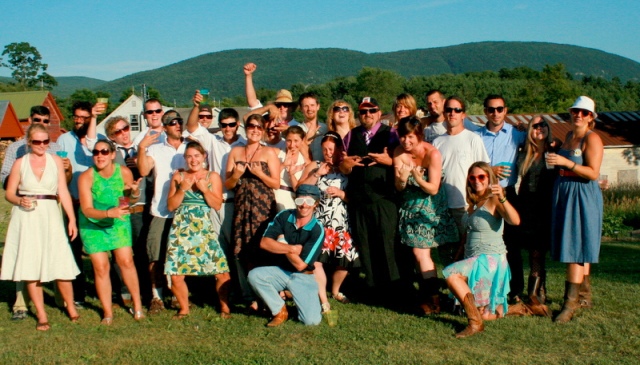 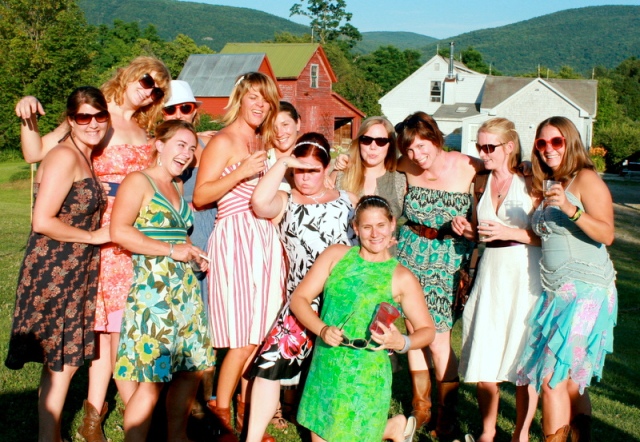 Thank you to Hannah and Gray, and to your families, for bringing us all together, and for having the kind of love that makes people want to get all excited and dance till dawn.  We love you guys so much. 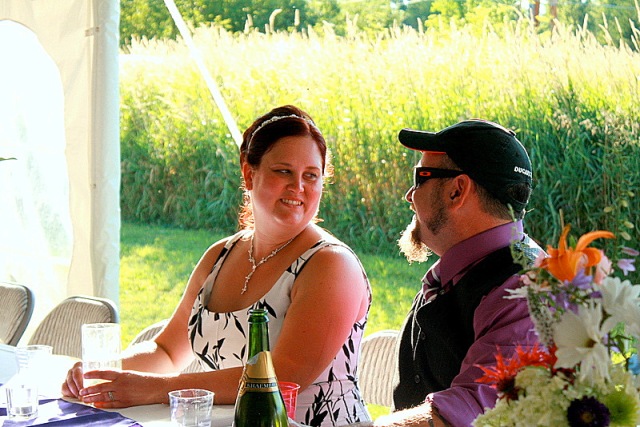