I am LOVING having a toddler.  Sure, his budding opinions (and subsequent screams) can be a little overwhelming, and yes, constant vigilance is something of a mantra, but getting to witness the world through the living that’s to be done by a toddler is, in a word (or four), a whole lot of fun.

I am enjoying all of the exploration, the words, the escapism, the mobility, the constant constant constant that comes with an older child.  Don’t get me wrong, I l-o-v-e the sweetness of babies, the newness of the world, the rapid growth, but having Asher blossoming as such a little person feels a lot like getting let in on the secret (or in some cases, the joke).  Every day we get to peek into his mind now as he moves from one thing to the next and screams with frustration and laughs at his little amusements and says yes to this and no to that.  He is becoming so much himself, and I can’t get enough of it. 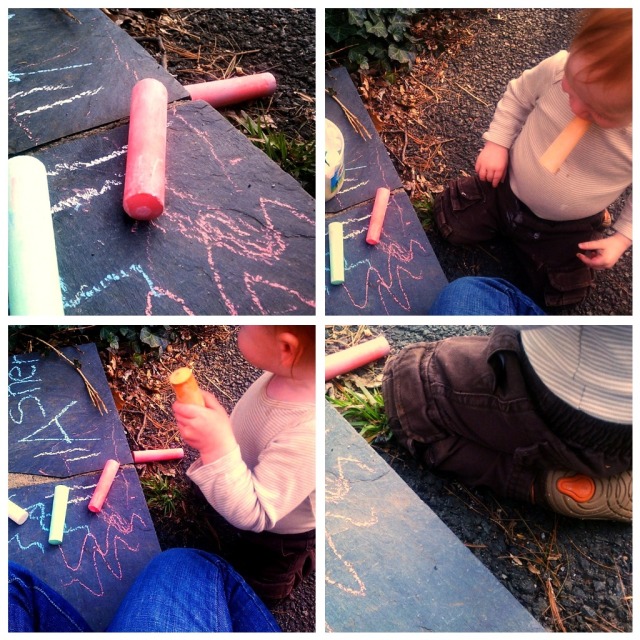 Drew and I are both really geeking out on how much we can do with Asher now after a long winter of four walls and not much else.  It was so cold this winter, and while neither of us has ever been especially keen on winter, it is not hard to begin getting stuck on words like “trapped” or “locked inside” or “loosing my ever loving mind” when the thermometer cannot be bothered to look north of 40 for months on end and we have a child standing by the front door begging to go “aw-die” every 10 minutes.

With the recent warming I have this vision of the Waltons exploding, confetti like, out the front door in plumes of color with The Age of Aquarius playing in the background as we twirl deliriously and suck in fresh air and start shaking out our freak flags a little, ready to raise them high because we made it!

Our conversations at night are now revolving around thinking of things to do with Asher, places to take him, camping trips to plan, toys to track down or attempt to build, plans for pools and creeks and beaches, Sunday afternoons in the park with friends, Friday afternoons spent listening to live music “aw-die”, and comparing notes about pictures that were pointed to in books, words that were blurted out spontaneously (it’s ok if you don’t believe me, but I swear on a stack of lawn chairs that he said octopus in the bath tub the other night.) and all of the other little things that fill the days of following a child around. 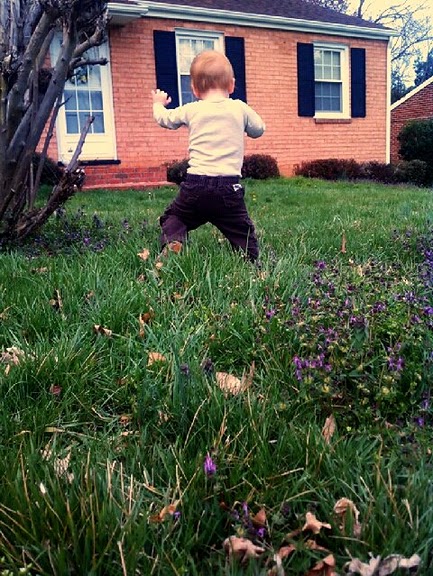 I’ve always known that I wanted to be a mother, I’ve always known that I wanted to be absorbed in the world of growing minds and the full spectrum that is explored by humans as we start at zero and head steadily towards 100ish.  I’ve always known that I’m cool with letting my life be changed by having a child and continuing to explore my own unfolding path in tandem with his, but I never ever ever ever could have known how nuanced that enjoyment would be.  I never knew that there would be a time in my life when I would just smile at (or honestly not even notice) a drool/yogurt/best-not-to-ask covered shirt or long for the hours at work to tick by so that we could get down to business with the sidewalk chalk and practice picking up and putting down the same stick 95 times.  I never knew that I would actually be excited about the rare night that Asher “needs” to be rocked at 2am (definitely remind me of that when Walton 2.0 makes his or her appearance down the road, ok?) or feel a little tingle of parenting excitement as we navigate teaching him not to hit, teaching him to share, teaching him to be gentle…but you know, I really do.

I will always love getting out and having me time and all that, but to be completely honest, in my more thoughtful moments, I’m able to see into the future where Drew and I are looking at each other and commenting that the house is so quiet now that there are no kids in it and it makes me want to suck up every second of this.  Right here, right now.  To spend my afternoons hunched over following a little person that’s just beginning to learn how to stand on his own two feet, and getting lost in thought about how his little copper dome looks like a terracotta easter egg amongst the empty garden pots.

But don’t worry, I don’t spend long getting too misty eyed about that future, because the dream is complete when Drew and I take a second look around our empty nest, then smile knowingly, give each other a reassuring hug, and grab the plane tickets (or rocket shuttle tickets or whatever is going to be going on in 2035) and hit the road.  Happy present, happy future, happy mama.

4 thoughts on “walkin’ on sunshine”