I’m failing the blog-o-sphere with this late Halloween post, but my computer is on the fritz so I am at the mercy of its electronic whims.  That’s my disclaimer, here’s my post:

We dressed Asher up as a dog for Halloween.  He didn’t especially like it.  (Can you blame him?  Didn’t I say I would never do things like this “when I have kids”?)   Exhibit A: 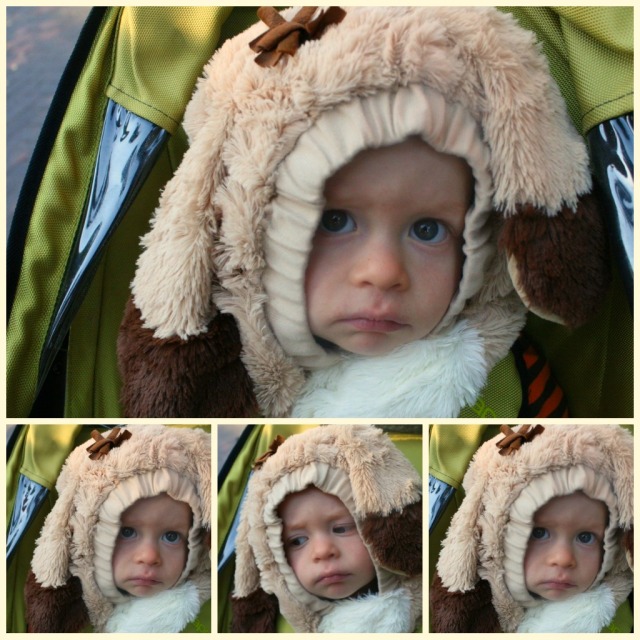 Pretty funny, right?  I mean, Asher’s misery isn’t really funny, but that look is just incredible.  I joked that if folks didn’t hear from us for a couple of days, they might want to check in and make sure that Asher hadn’t exacted his revenge in our sleep.  In the end though, he warmed to the whole floppy-ears-on-my-head situation, and quickly reverted back to his usual smiley self.
Exhibit B:

And brace yourself for some serious cuteness, because Asher the dog kept company with a pumpkin, a California Raisin, and a Super Austin when we went “trick-or-treating” on the lawn at UVA (read: sitting on a blanket taking 10,000 pictures of each others kids).  Cute Overload.  We discovered that it’s nearly impossible to get four children to sit/look/stop chewing on whatever at the same time for a picture, so first their cute faces… 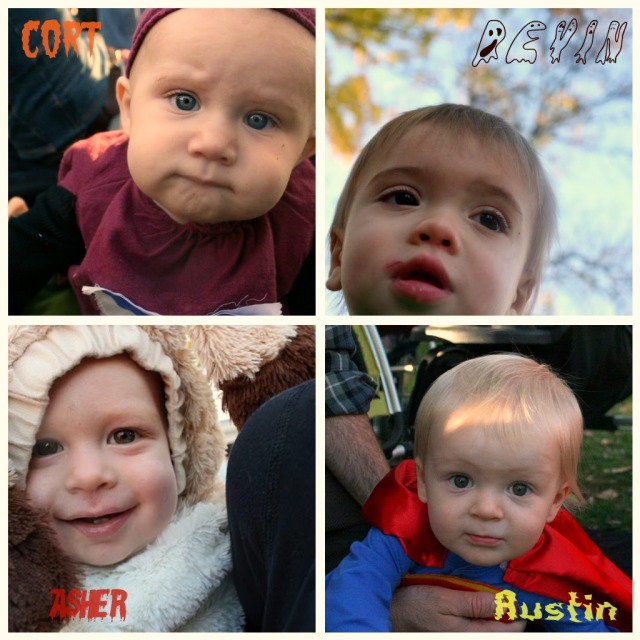 And now their sweet costumes:

(note that Super Austin and the California Raisin are homemade!) 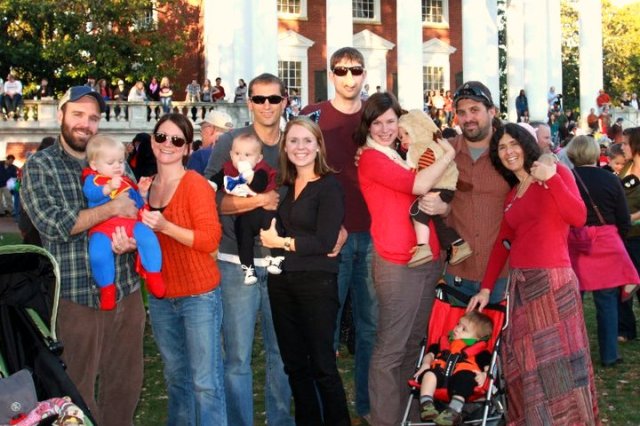 It was cool to watch the 1,000+ folks that turned out for this (if not a little overwhelming) and oooo and ahhh over the costumes of all of the kiddos, all under the shadow of Thomas Jefferson’s Rotunda.  To be completely honest, I’m not sure if we’ll go back next year, as my inner wallflower was feeling a little panicky in such a large crowd, but time heals all wounds, and more than likely I will have forgotten about that by next year.

And what about Drew and me?  Well…

We celebrated on Friday night as garden gnomes at a friend’s party.  Unfortunately this is the only picture that I have of the night, but really it sums up the evening nicely.  And here’s something that I didn’t know to expect as a parent: I never thought that there would be a point in my life when we would be texting a 16-year-old (our babysitter) and asking if we could stay out for just one more hour.  Maybe that makes us sound like lame parents, but secretly, I think it makes us kind of awesome.  The Waltons love a good dance party, especially when costumes are involved.  There’s nothing to validate your status as an adult like asking a 16-year-old for permission to have a little bit more fun.

So that’s it…all in all it was a great holiday and a fun weekend, and I have so enjoyed seeing everyone’s pictures!