Ahhh Friday.  We had our office White Elephant party today which was a lot of laughs.  I was wondering about the origins of the term ‘White Elephant’ and discovered on Wikipedia that

The term white elephant refers to a gift whose maintenance cost exceeds its usefulness. While the first use of this term remains an item of contention among historians, a popular theory suggests that Ezra Cornell brought the term into popular lexicon through his numerous and frequent social gatherings, dating back to as early as 1828.

Well clearly White Elephant parties have digressed to be a bit more tongue and cheek, but the suggestion above is that they’ve always aired on the side of absurdity.  I remember a white sailor statue that weighed about 50 lbs that circulated amongst my parents White Elephant parties of yore, and my generation tends to take in a more, ahem, inappropriate direction, but in the end there are always pretty funny.  I thought that I would put up a very short video of what I got at the party today, because there’s really no way to describe it other than to say that it’s a jump-roping pig and then just let you see for yourself.

And now I just have to cross off the minutes until my brother Drew, his wife Meg and their son arrive for a weekend of Christmas fun.  Below are two recent pictures of little man Jack.  My brother describes him as all boy: he’s fiercely dedicated to trucks and tractors and tools and such a gorgeous child.  We are really looking forward to getting our fix this weekend! 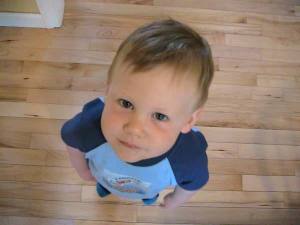 The next one is one of my all time favorites.  This is Jack looking as though both he and his kitten Albus ran out of steam at the exact same moment and crashed for a quick nap on the dog’s usual resting spot.  Jack is never without his kitten Albus, which he reports to me on the phone as “Alby!” in a tone of pure delight and devotion.  Little Albus found their family and walked home with them as an itty bitty kitten and so from his earliest weeks, as far as he knows, every cat has a boy to carry him around by the tail and nap with.  Not a bad gig at all. 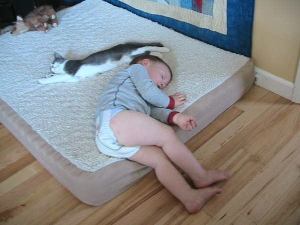 Happy weekend to you all!